Luxury penthouse in a premium residential complex with high, four-meter, ceilings - this is a challenge project. , we turned 77 m² of a single-level penthouse into a two-level apartment of 95 m², using metal structure Almost all compositions and elements are designed individually and are handmade. The priority is environmentally friendly materials, namely glass and wood, which are found in the decoration. We combined forged elements with concrete walls and gold chandeliers, modern classics with a brutal loft. Each room is autonomous, while keeping the integrity of a single space. The noble green color of furniture in harmony with plants, decorative moss on the walls and paintings created for the project are stylish accents that create an atmosphere. The project turned out to be a real challenge for the Sksdesign company due to specific planning decisions. Firstly, in a space of 77 m², they were supposed to accommodate: a bedroom, an office and a spacious kitchen-studio with bathrooms and dressing rooms. Secondly, four-meter ceiling height complicated the task (the apartment is located on the top floor). At this height, the usual finishes, designs and lights look very different. And thirdly, magnificent apartment has only two windows.
More details

Over the five months of work on the project, 15 design and design solutions were created.
Designers managed to divide the apartments into autonomous rooms, while maintaining the integrity of a single space. Thus, the penthouse of 77 m² has become a spacious apartment of 95 m². In the once-one-level room there are: a hall, three dressing rooms, two bathrooms with a bathtub and hydromassage shower, a spacious kitchen-studio, a bedroom and an cabinet.

Glass partitions visually enlarged the premises, and metal structures made by welding allowed creating additional space on the second level. Thanks to this non-standard solution, an cabinet and a dressing area of ​​15 m² appeared in the apartment, and the master bedroom received its own bathroom, which has daylight due to glass partitions.

A rather compact, but functional working area of ​​the kitchen is compensated by a bar, which can serve as an additional working space, while performing the zoning function. The white color of the artificial stone from which the countertop is made is in perfect harmony with the marble floor.
It should be noted that as a result of a number of planning decisions, our design studio coped with a difficult task - the ability to watch movies from different zones. It does not matter where the viewer is: by the sofa, in an armchair, at a table or bar, in the bedroom on the bed, on the second floor of the cabinet or even the bathroom - the movie is viewed from all angles.

On a specially created catwalk, there is a black bathtub from the Italian brand Relax Design. Black mixers from the manufacturer Cristina (Italy), perfectly emphasizes the interior of the bathroom. Custom-made washbasins made of noble natural stone are placed on an incredible countertop made of solid wood mounted on chains. The creative author's idea of ​​the tabletop, proposed by Pytaylo Vyacheslav, has become a real highlight of the bathroom.

Upholstered furniture from the Elizabeth de la Vega workshop is harmoniously interwoven with a handmade dining table. Under the stairs leading to the cabinet, the viewing space was filled with stones and plants, which are bright accents combined with decorative moss on the walls.

Lighting is created mainly by spotlights and Italian chandeliers. We paid a lot of attention to LED backlighting, which provides an atmosphere of comfort and tranquility.

The main decoration of the apartments are exclusive paintings, which were written for the project by the talented Ukrainian artist Leshka. And in honor of Toucan, who looks after the apartment from a picture on the second floor and greets guests with a playful smile with a glass of wine, we called the project.
We paid special attention to acoustics - for background sound, ceiling speakers are installed in each room. For a high-quality movie viewing system responsible ""home theater"" from the brand Dali. It is interesting that the rear speakers with gray plates were mounted in the walls, otherwise they would have blocked the passage.
The apartment has a smart home system with the ability to voice commands and various scenarios. For example, the scenario “cinema”, control of curtains, cameras, opening the front door and many other options.
Some Part of the walls are finished using veneer from the Italian manufacturer Alpi. The floors are tiled with Calacatta tiles. And to make it pleasant to touch a cold stone, all floors are heated.
To emphasize the height of the ceiling, three-meter doors were installed
Most of the elements, such as: wall panels, headboards, stairs, pedestals cast from concrete, walls made of glass and mirrors, shelving, are hand-made according to the sketches of our design studio
Duration of the project: six months 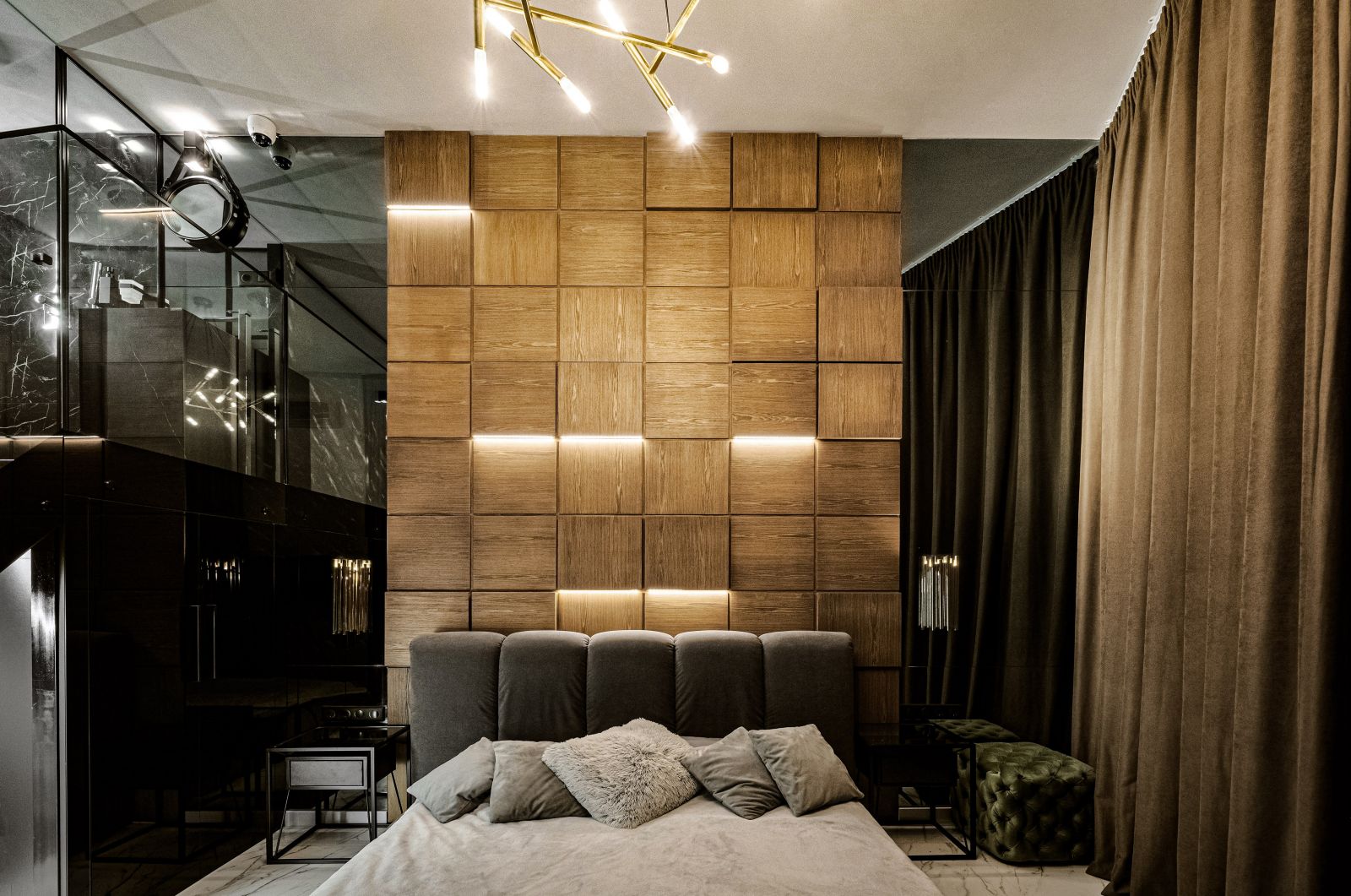 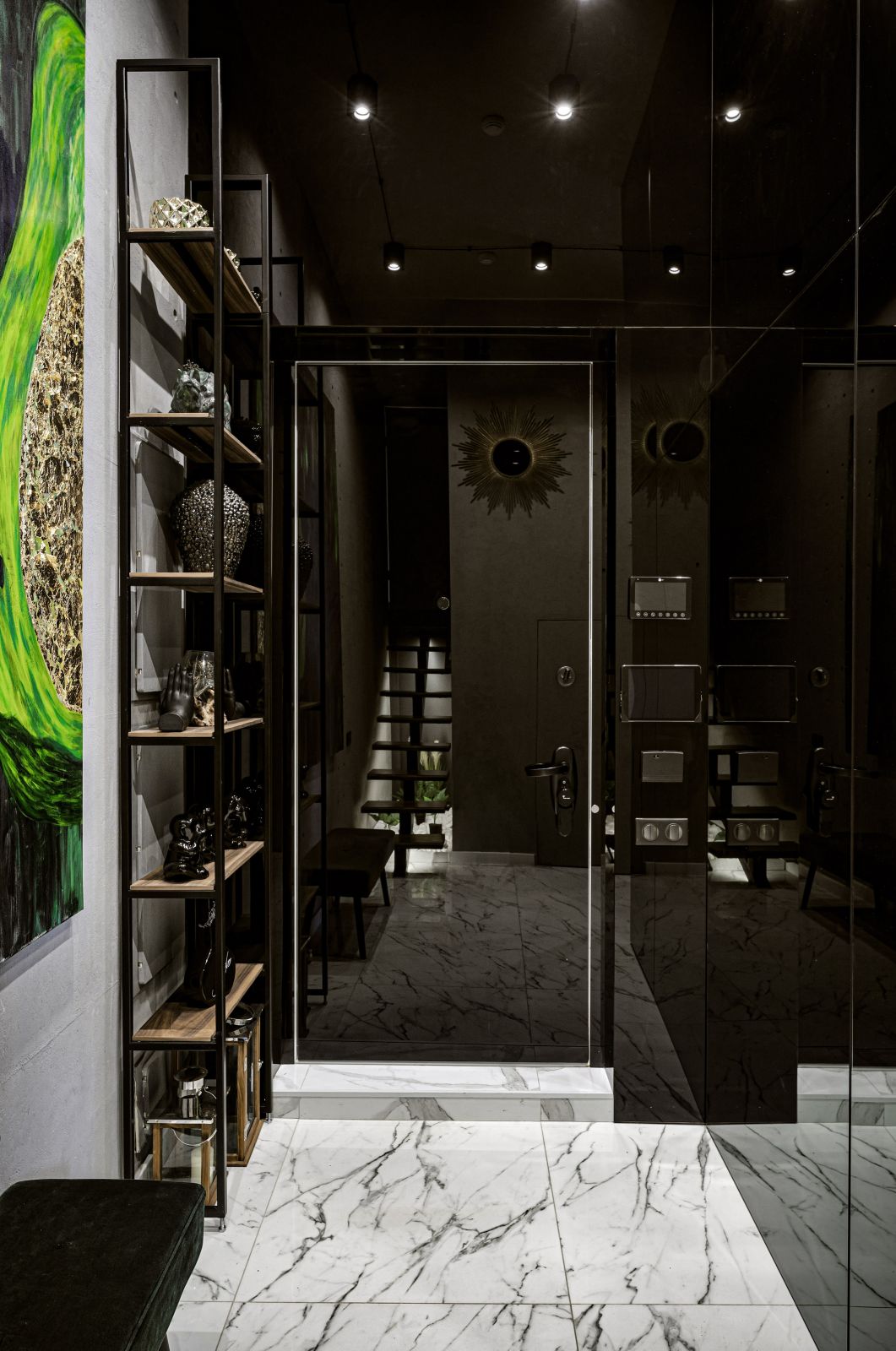 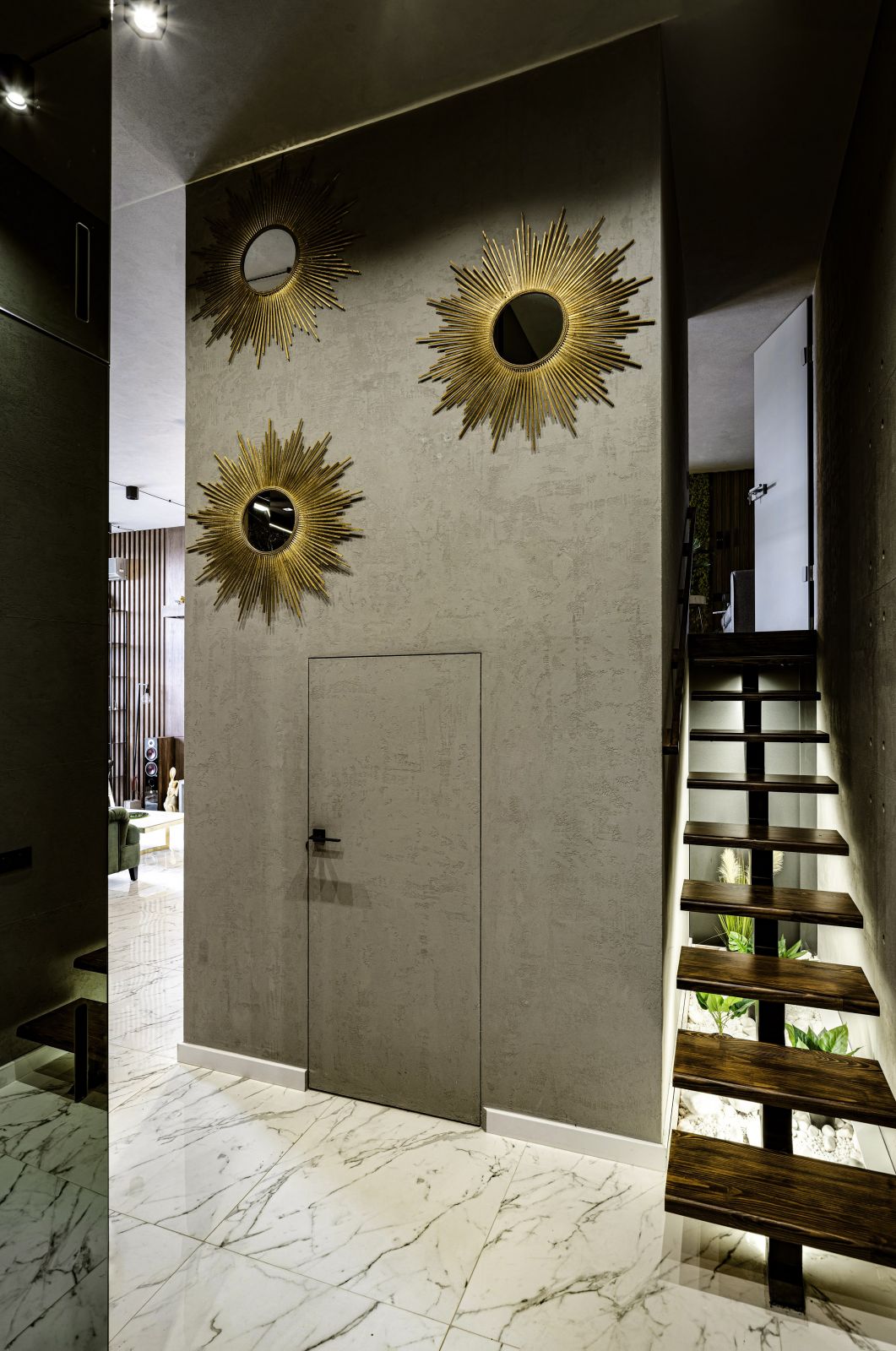 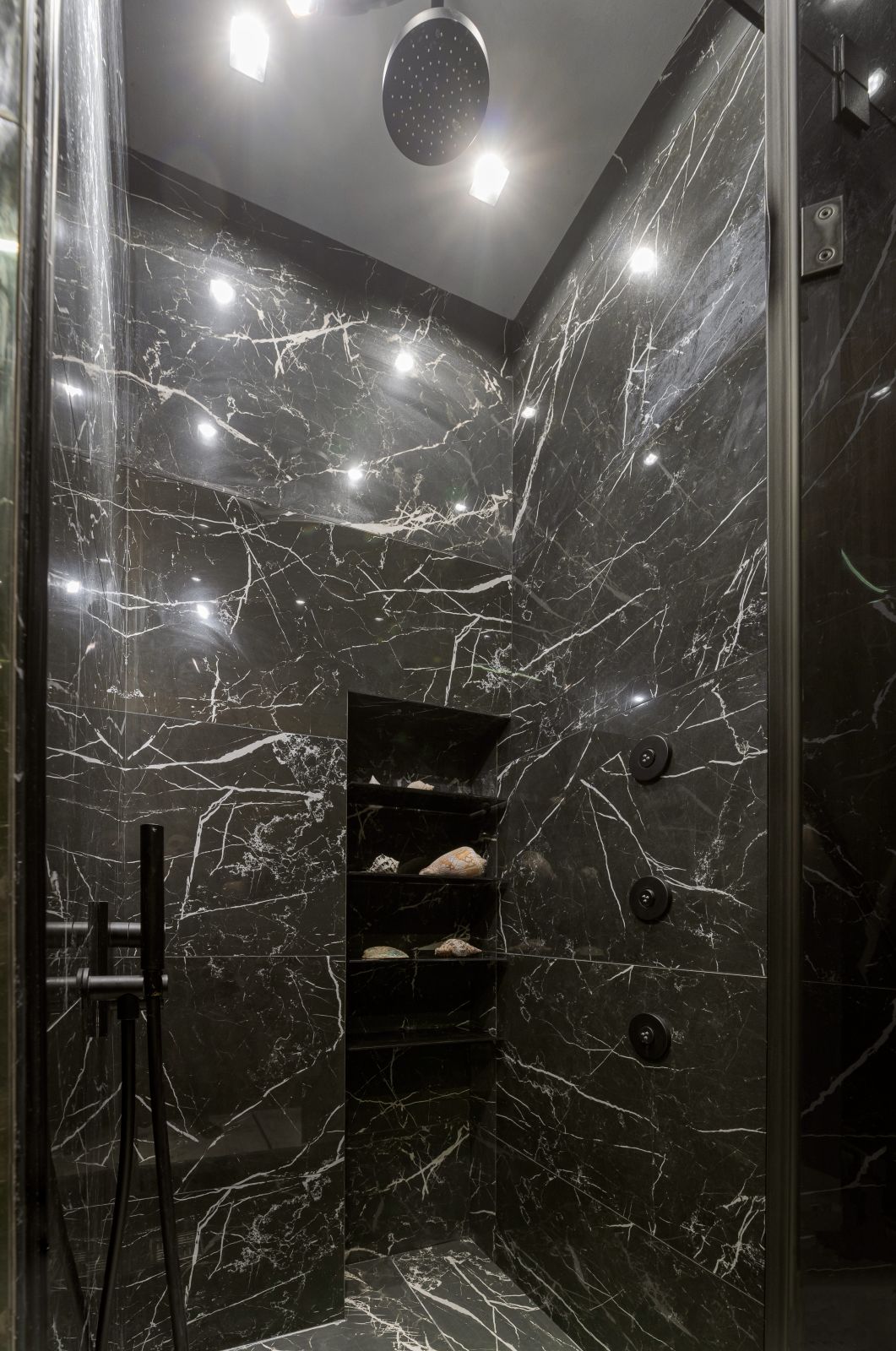 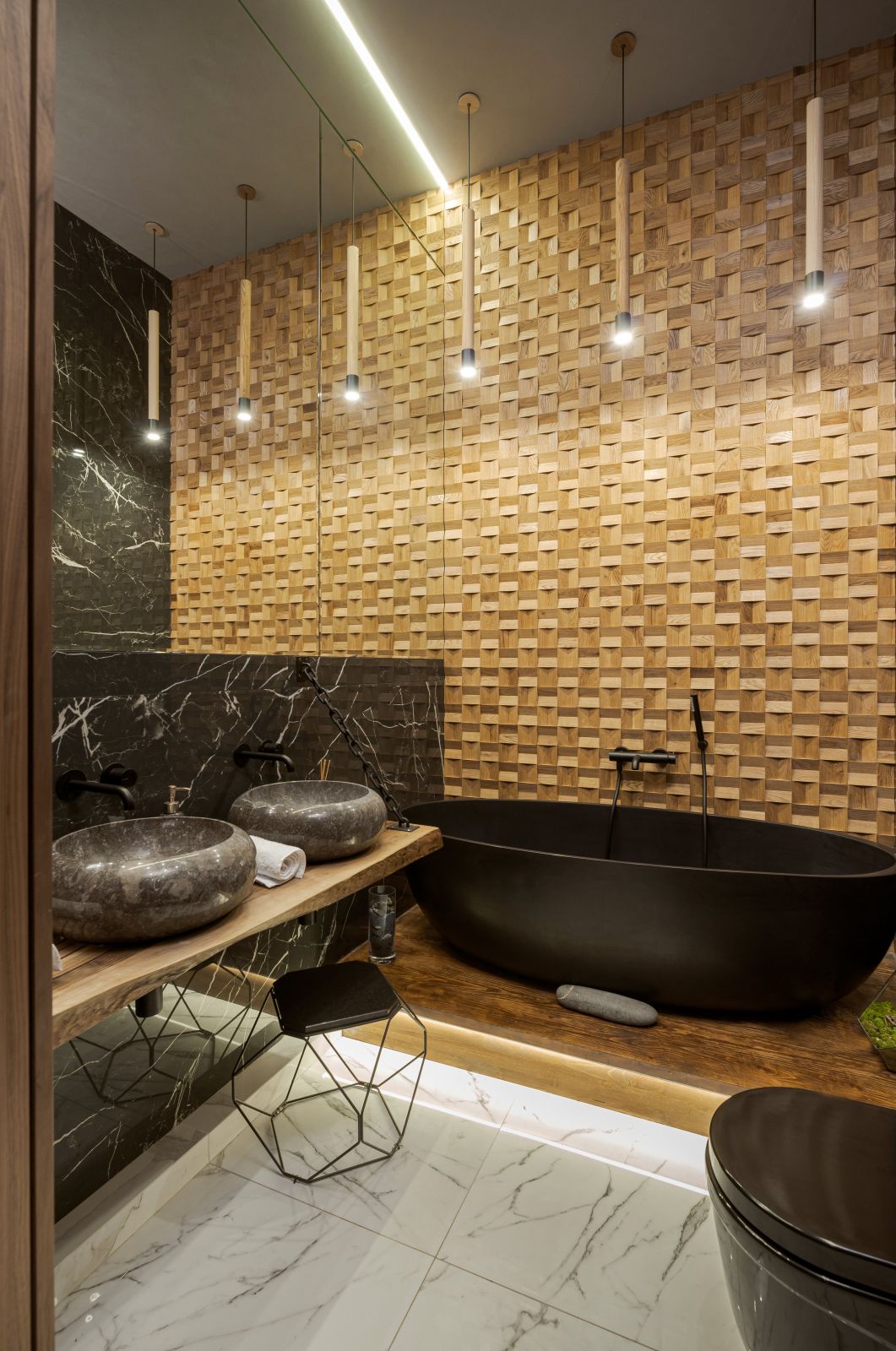 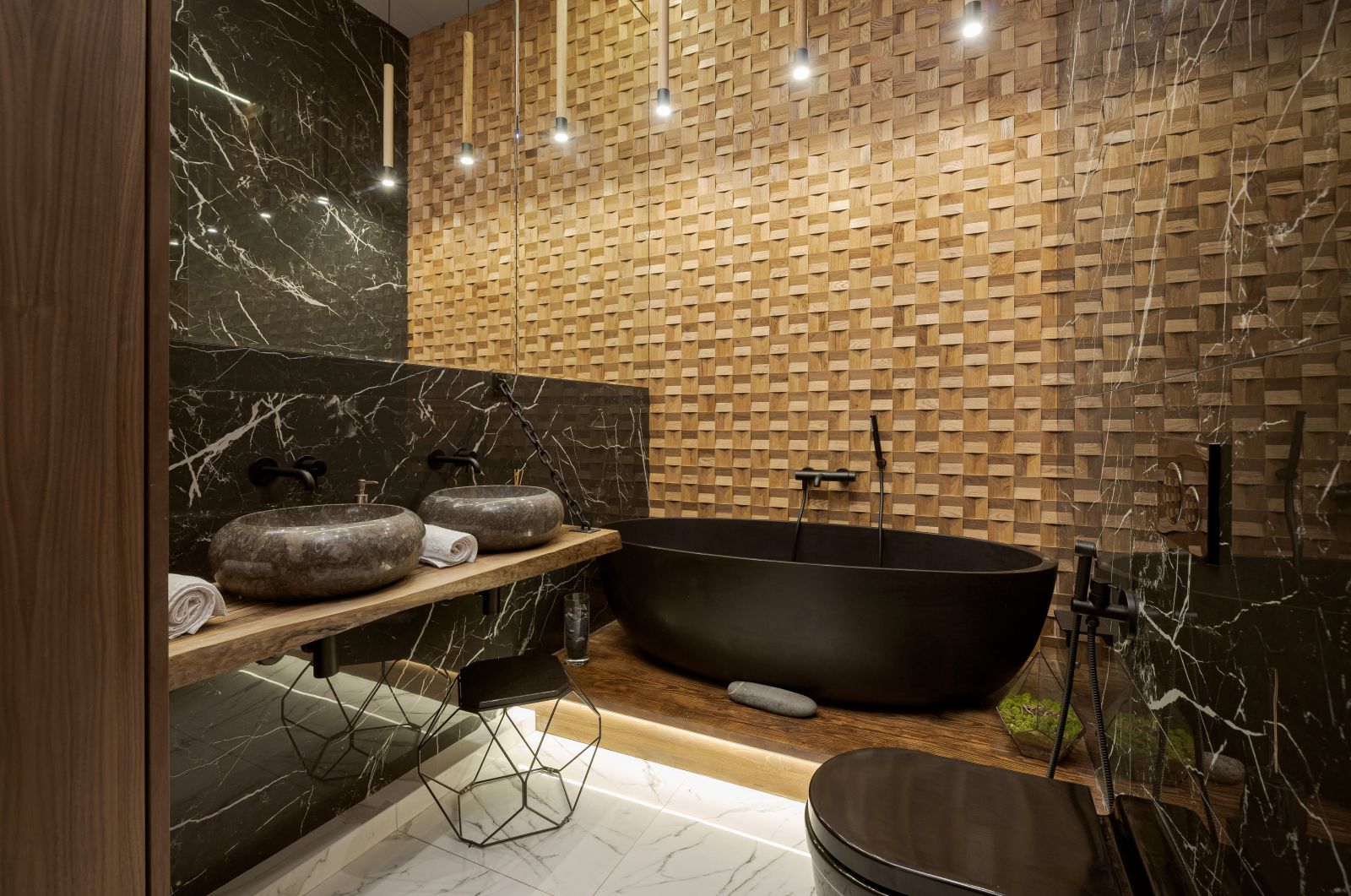 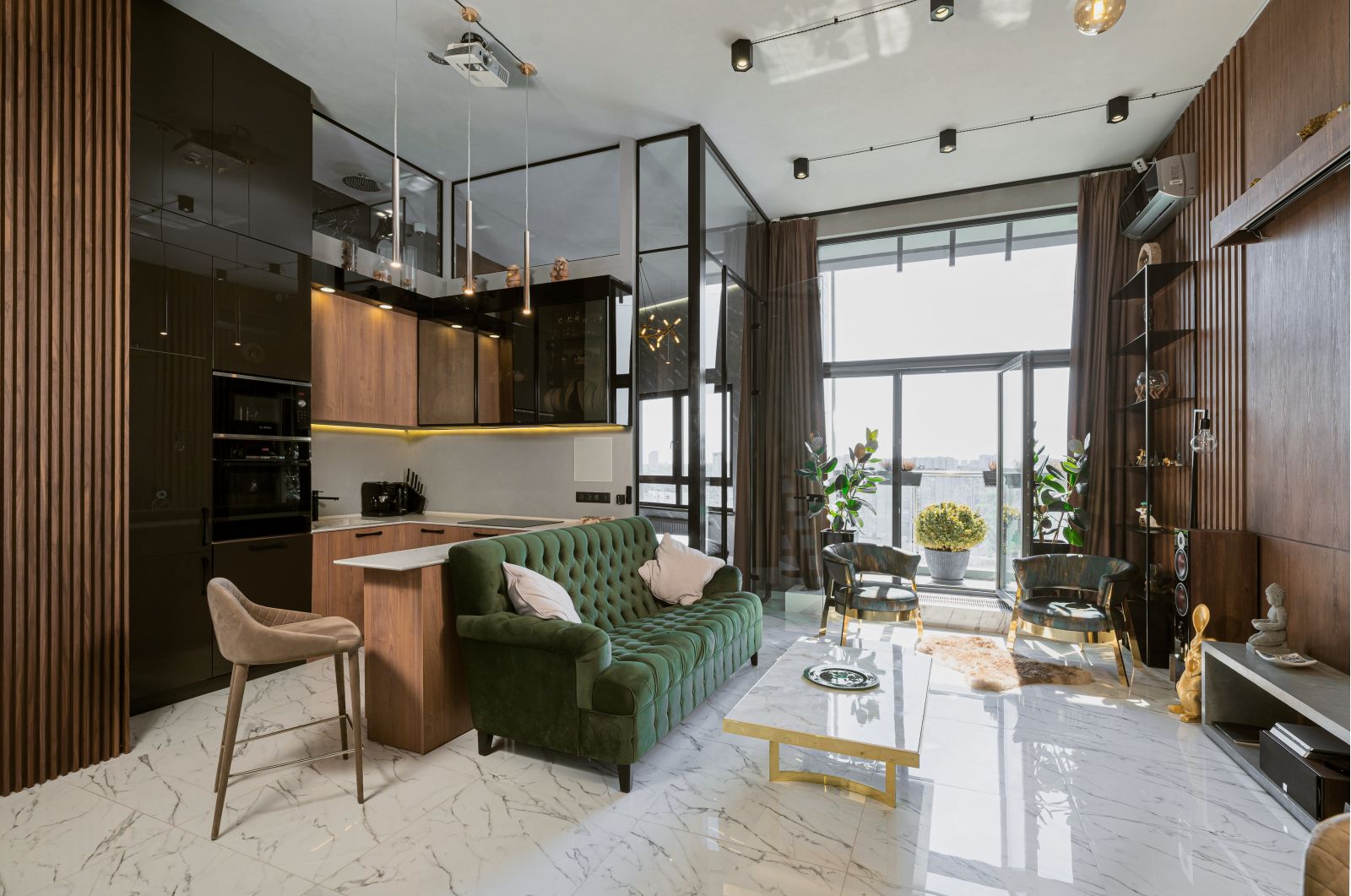 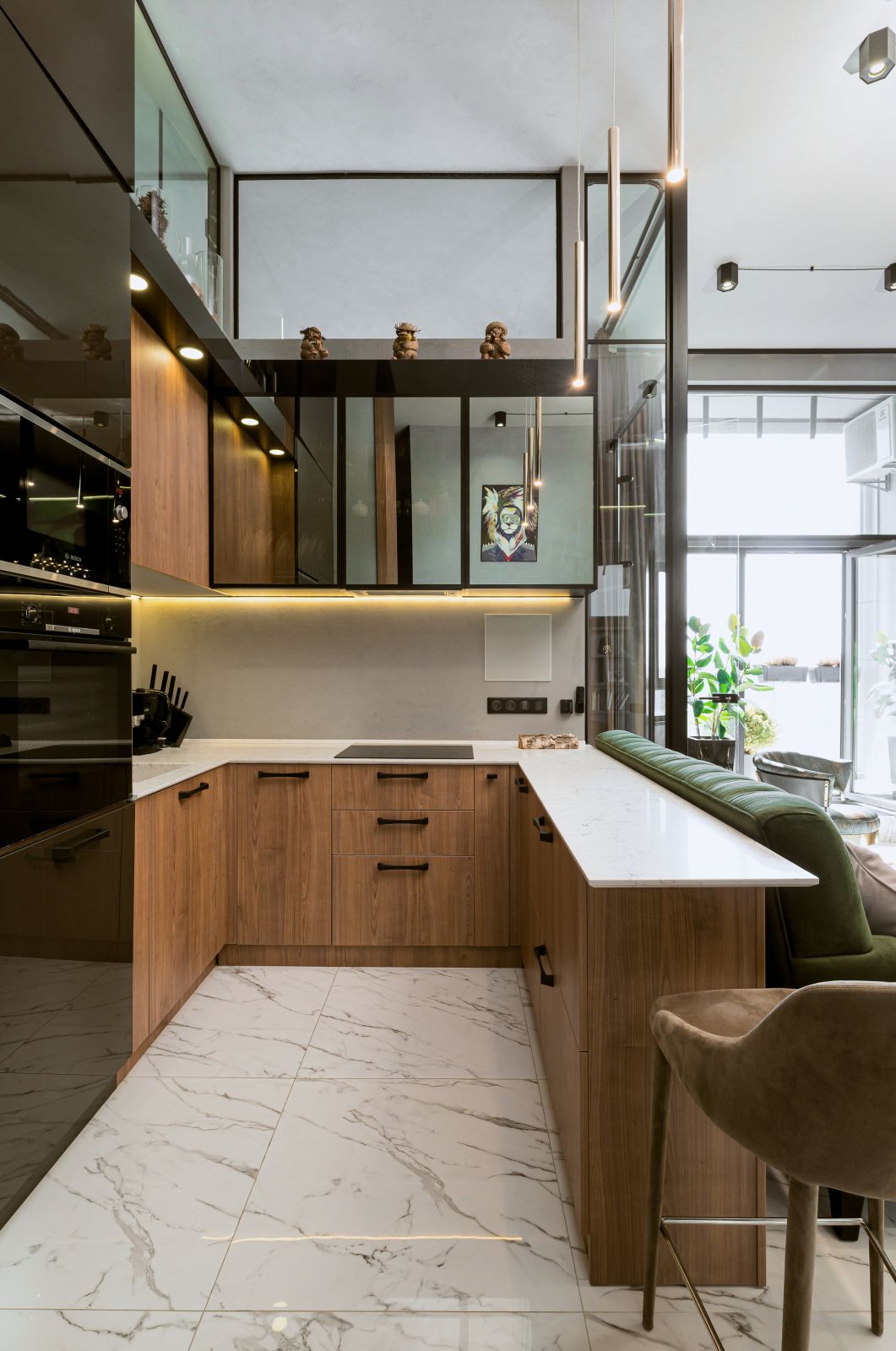 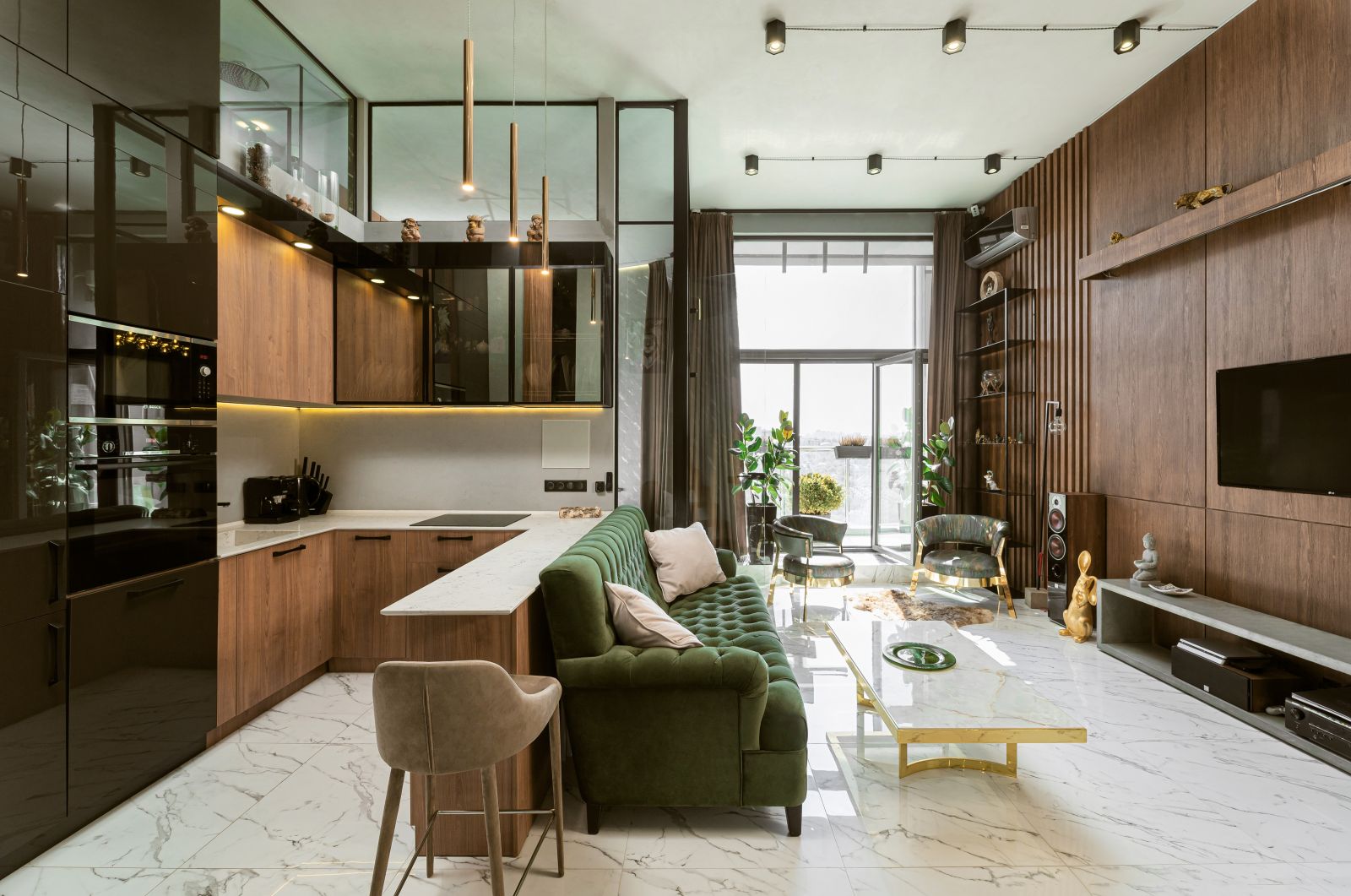 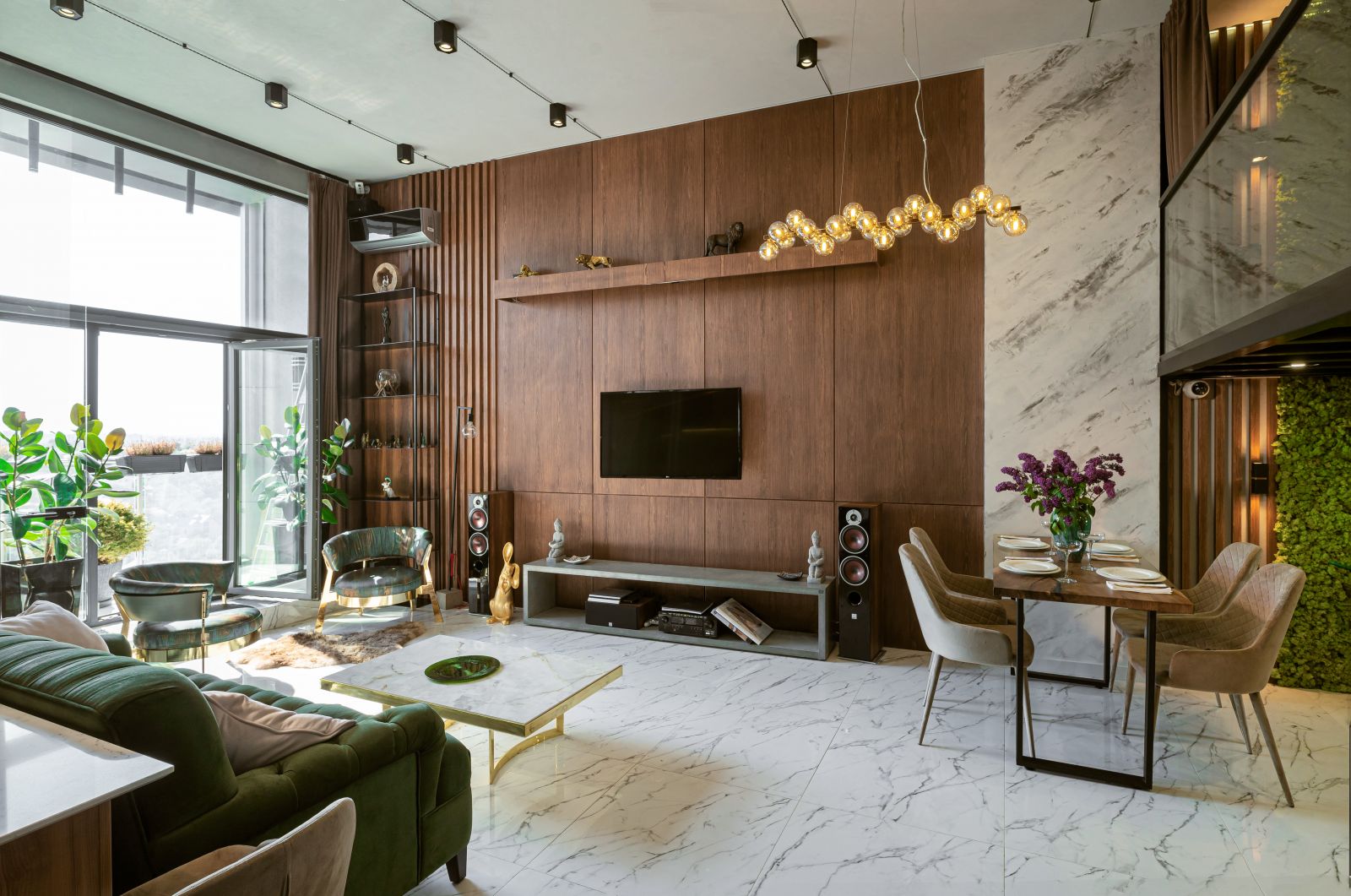 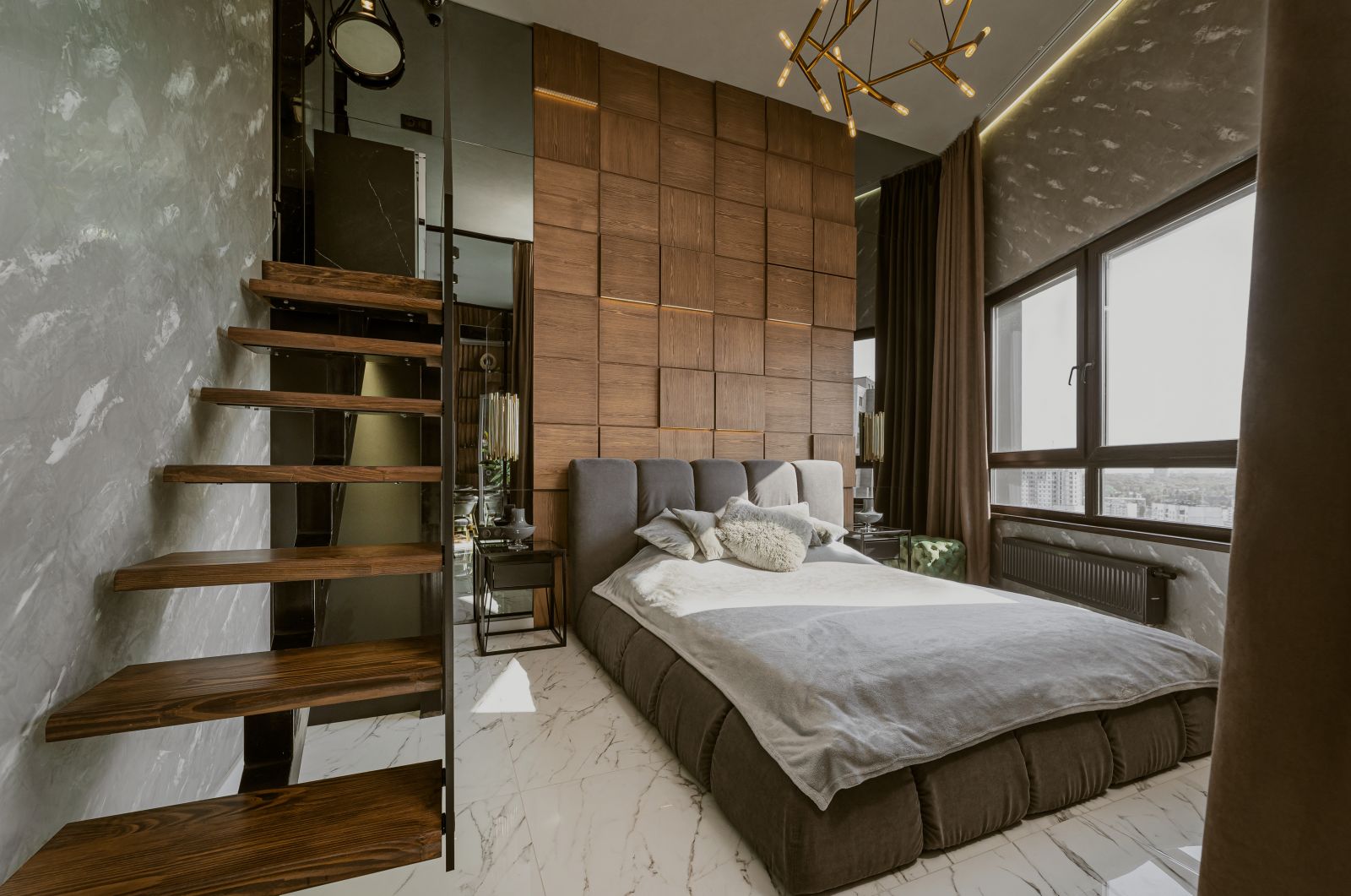 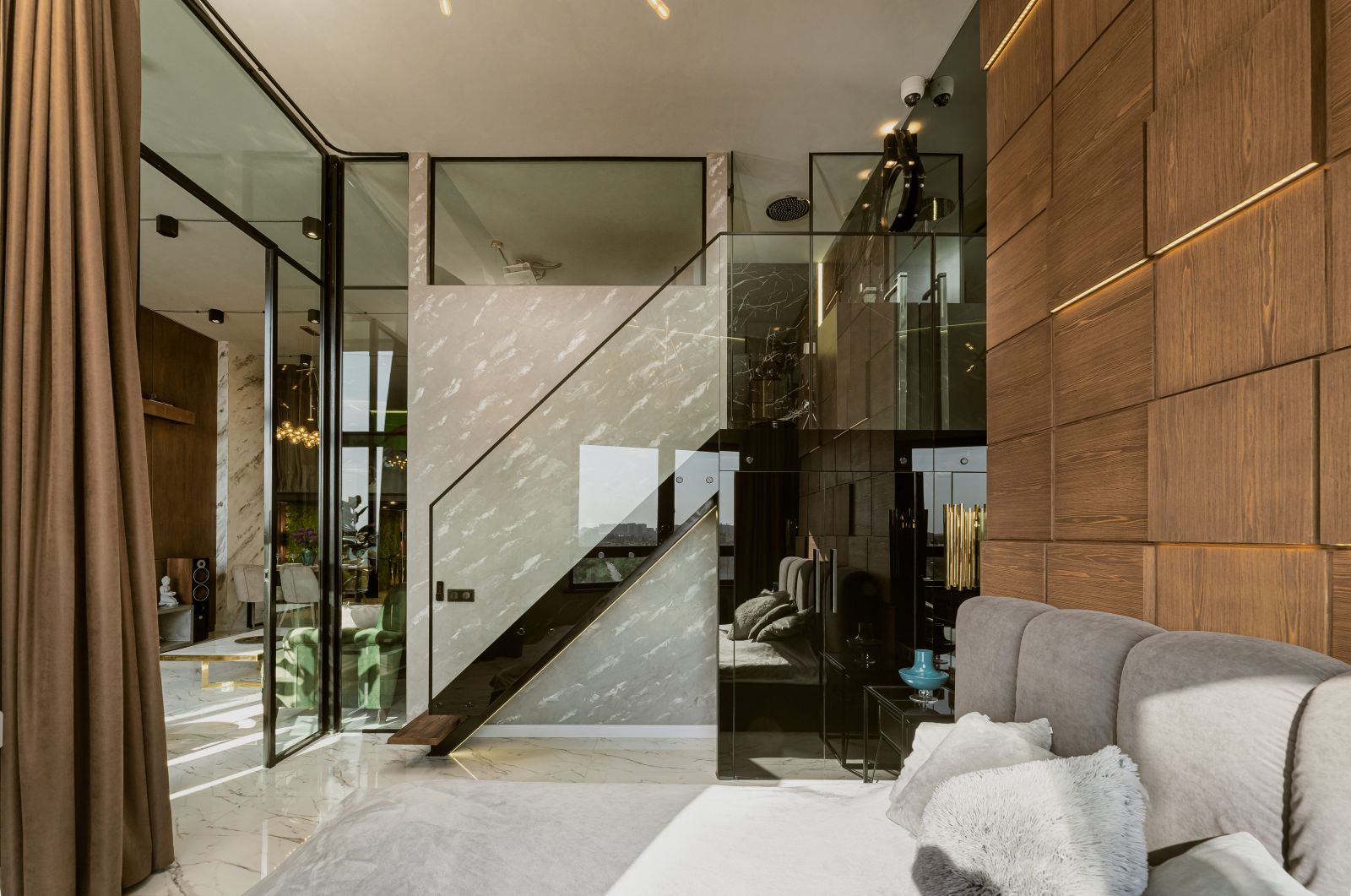 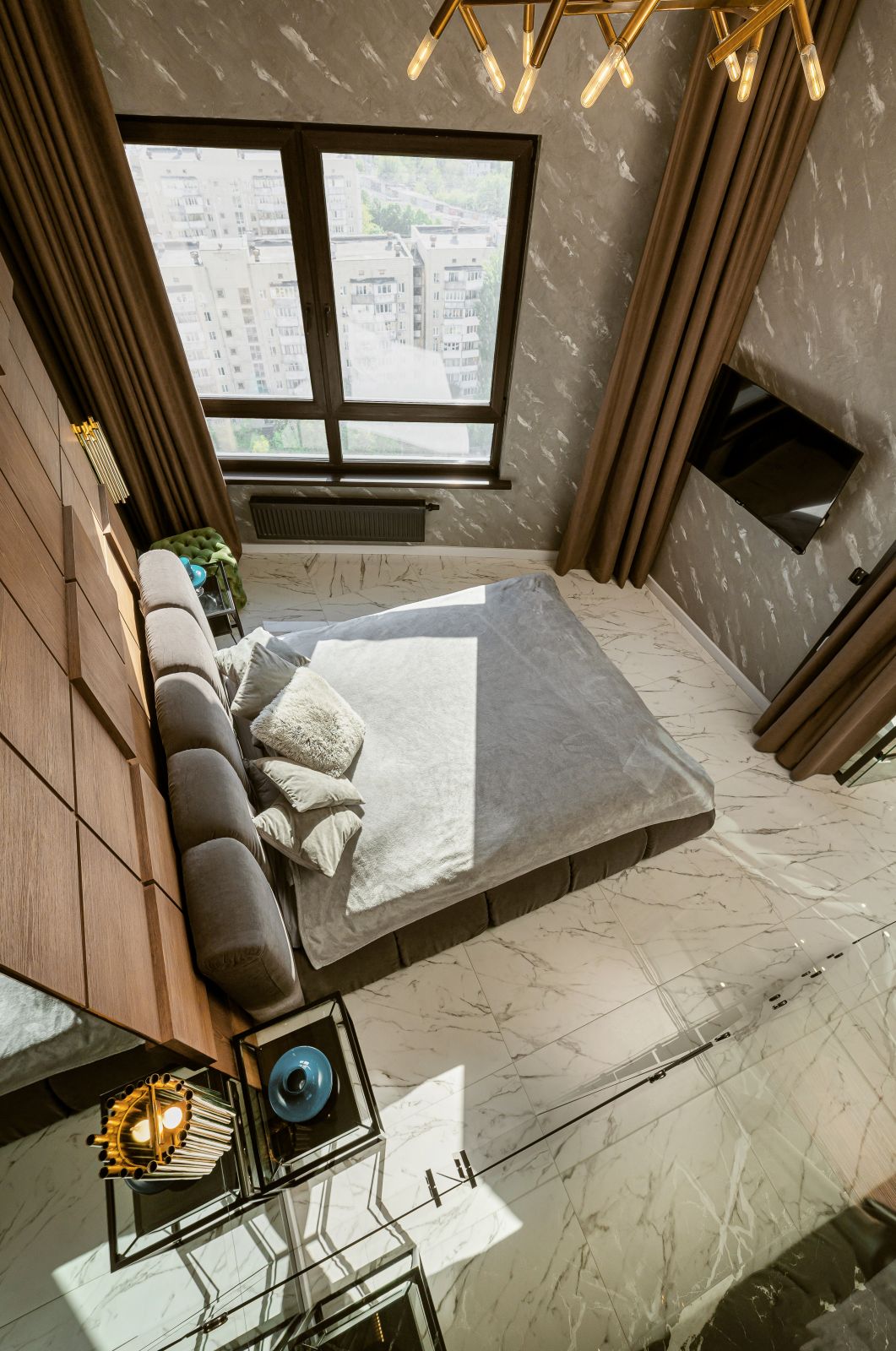 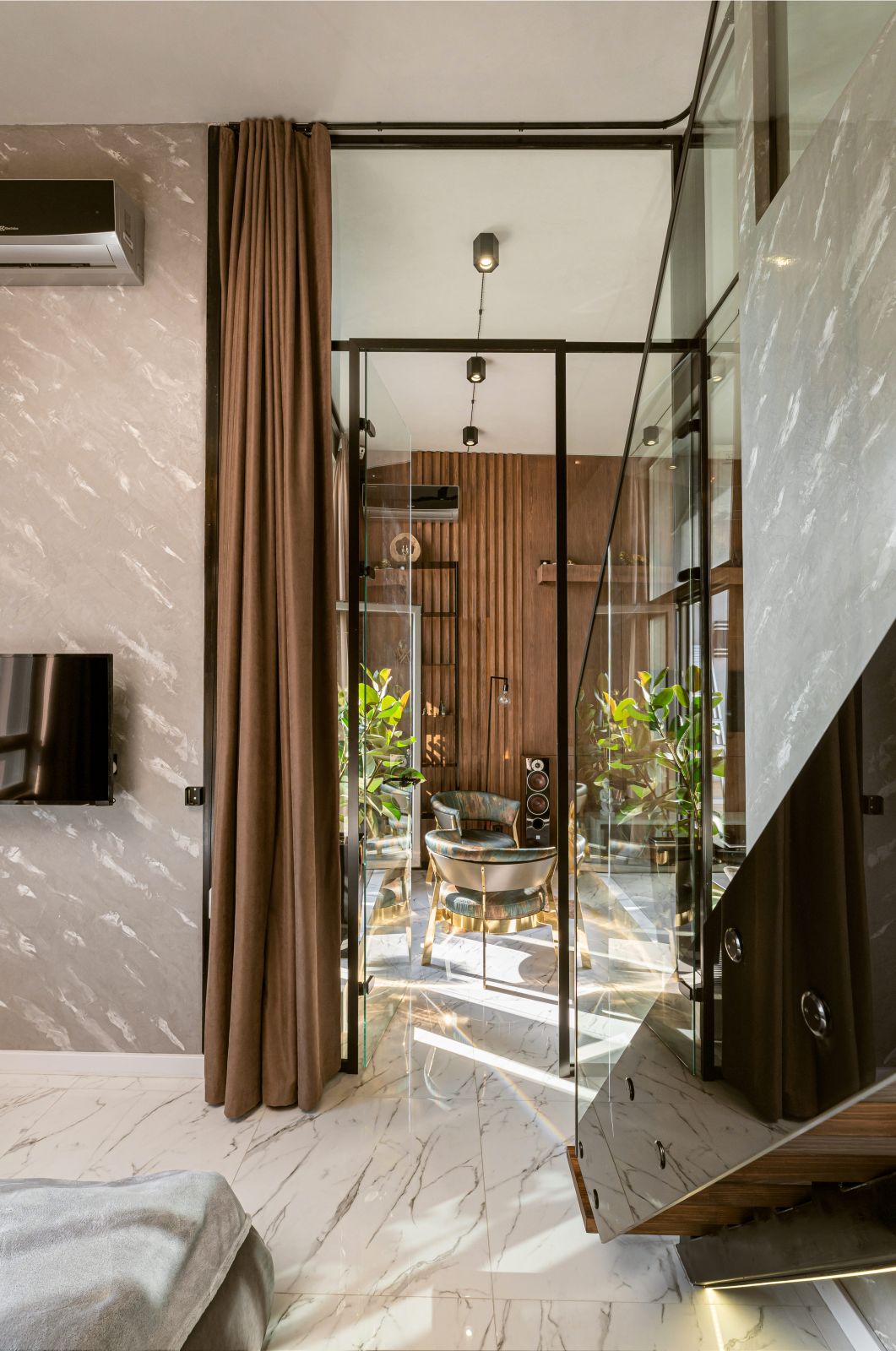 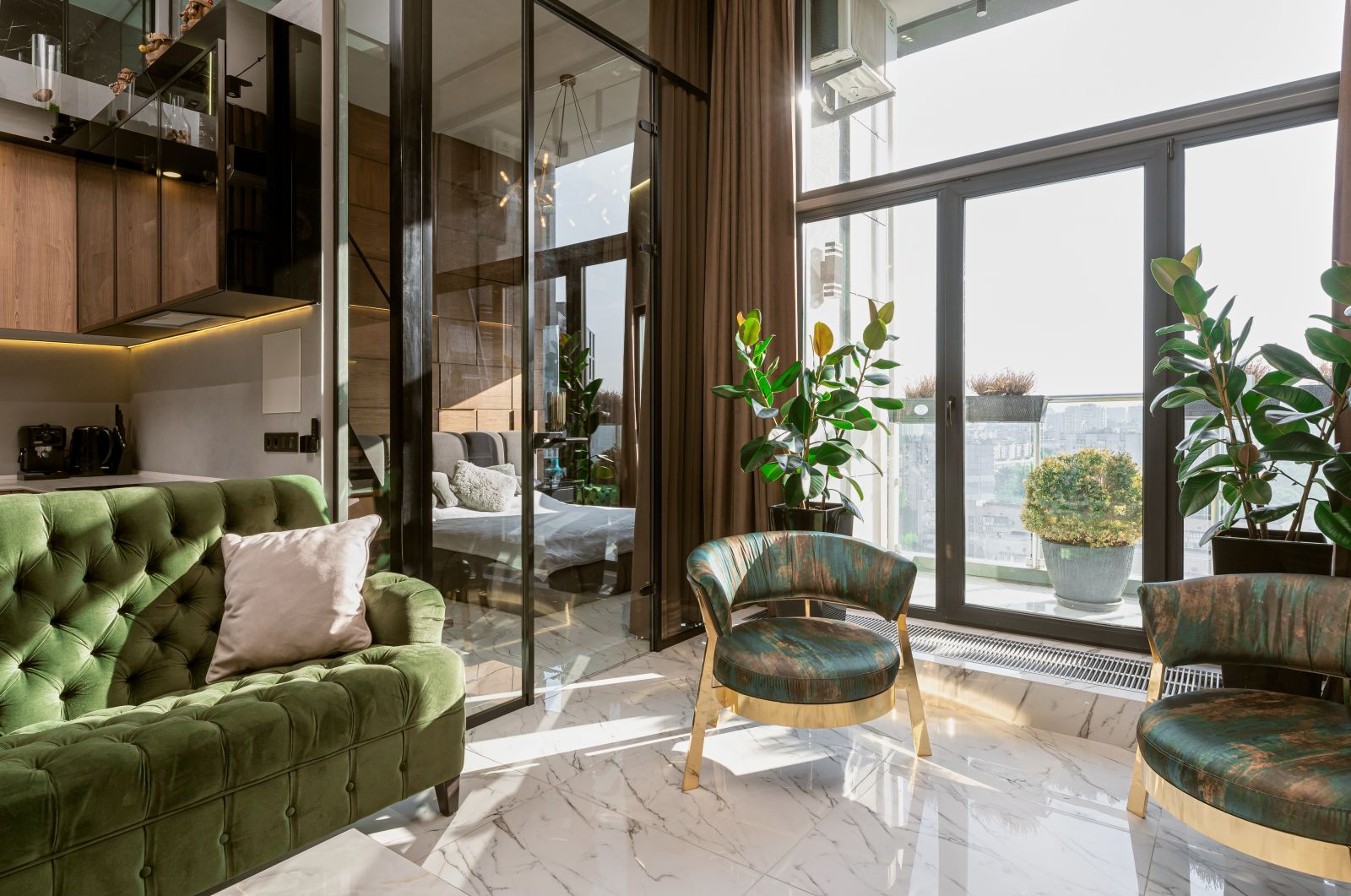 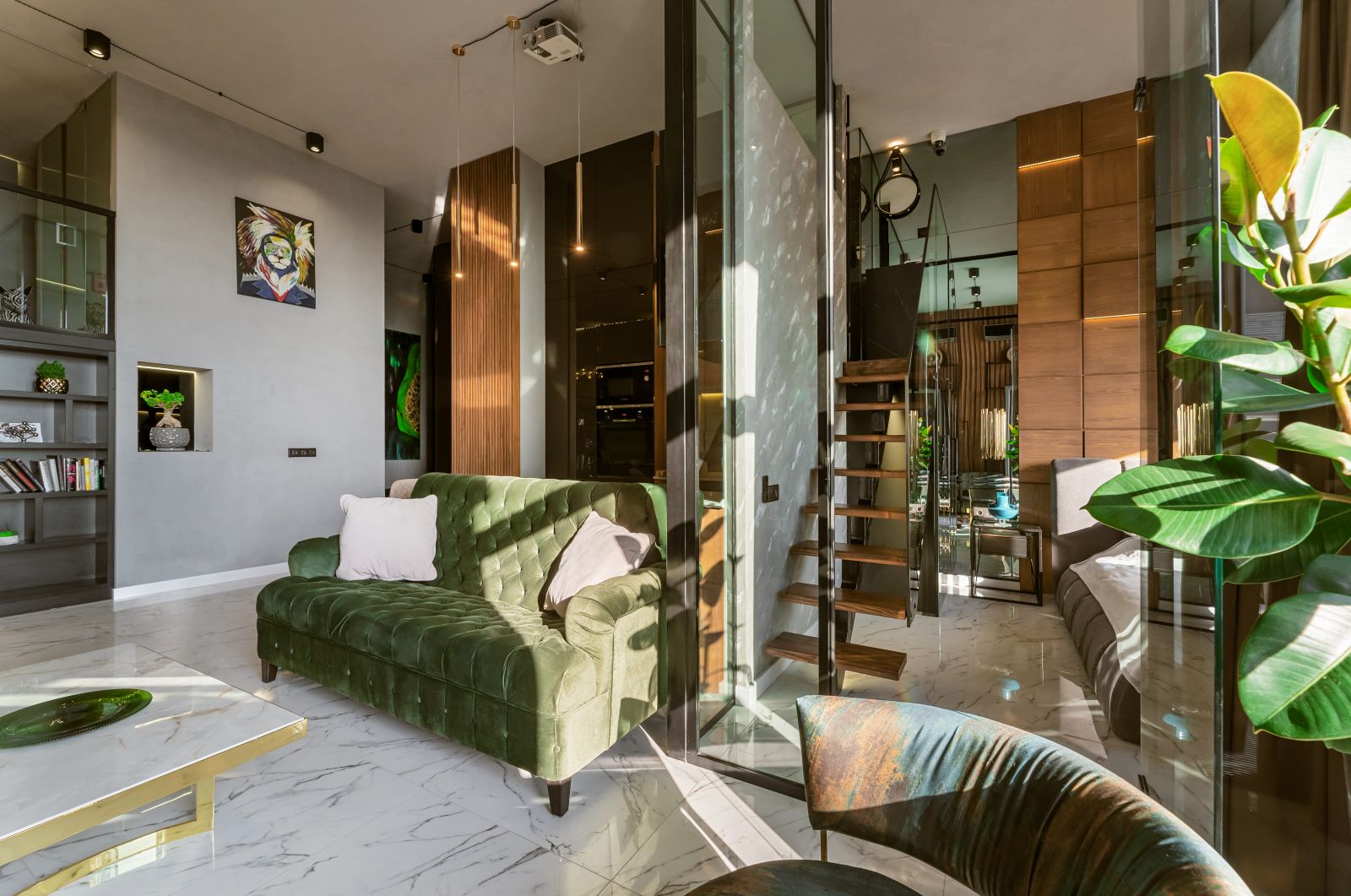 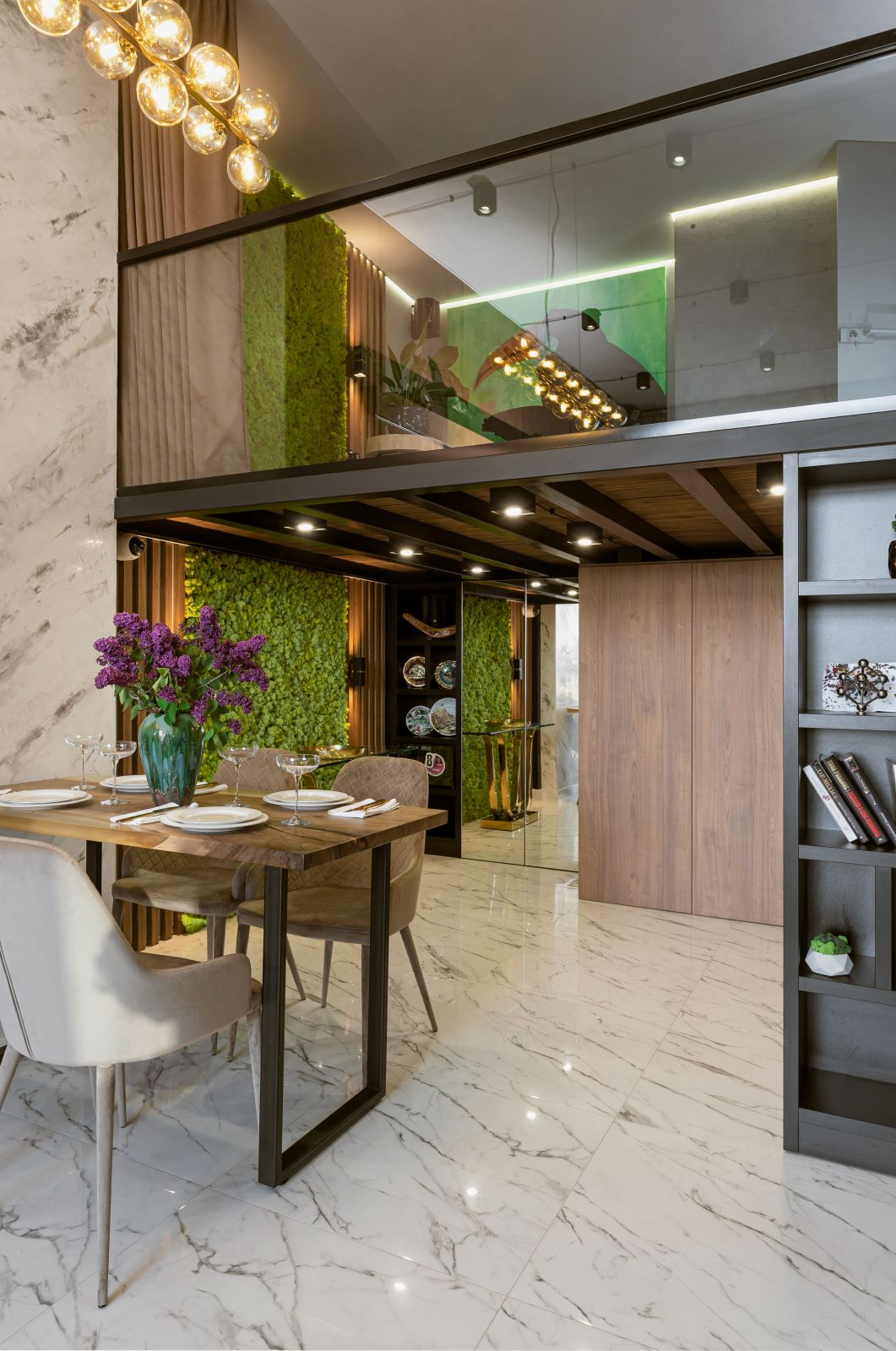 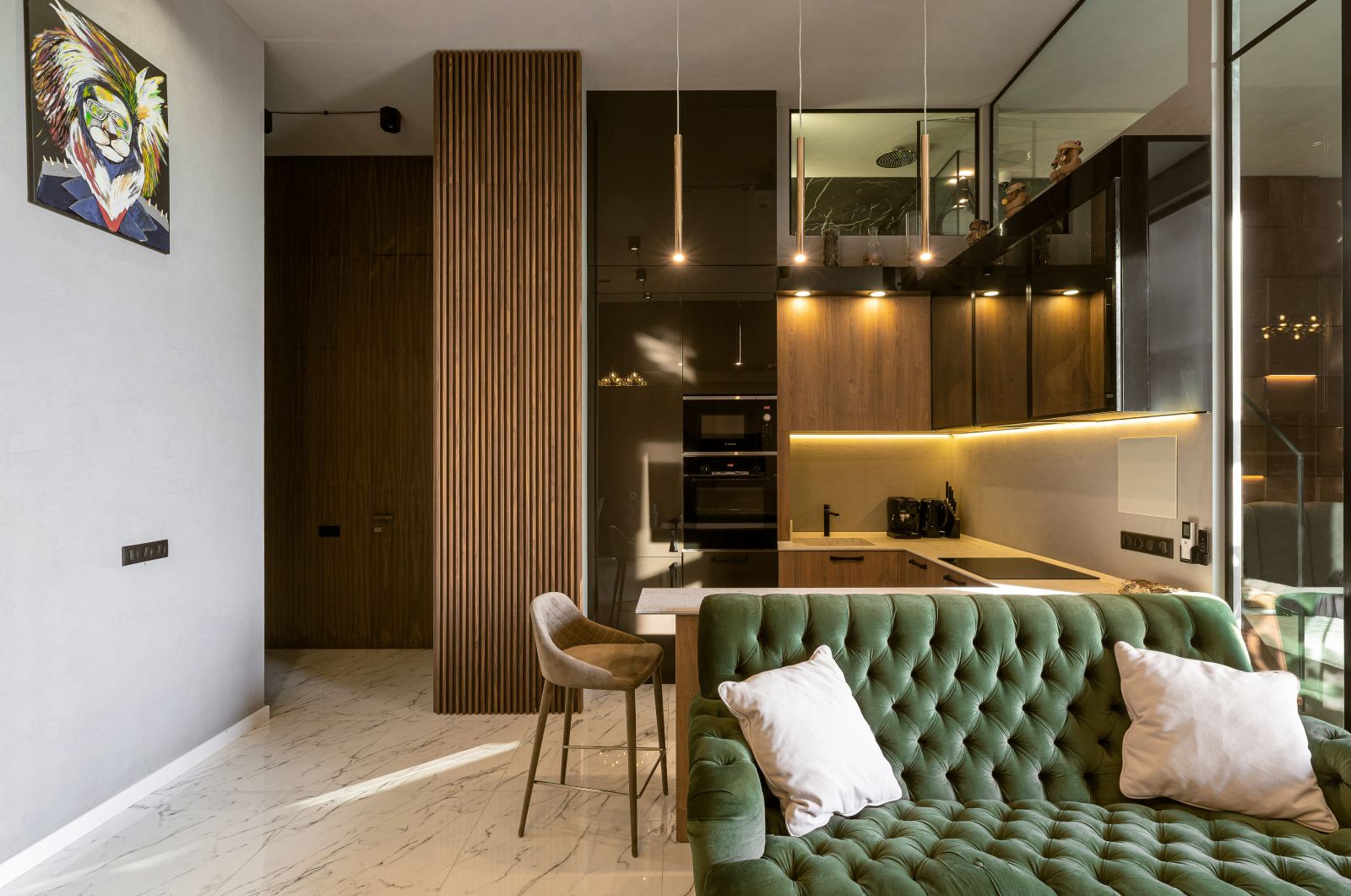 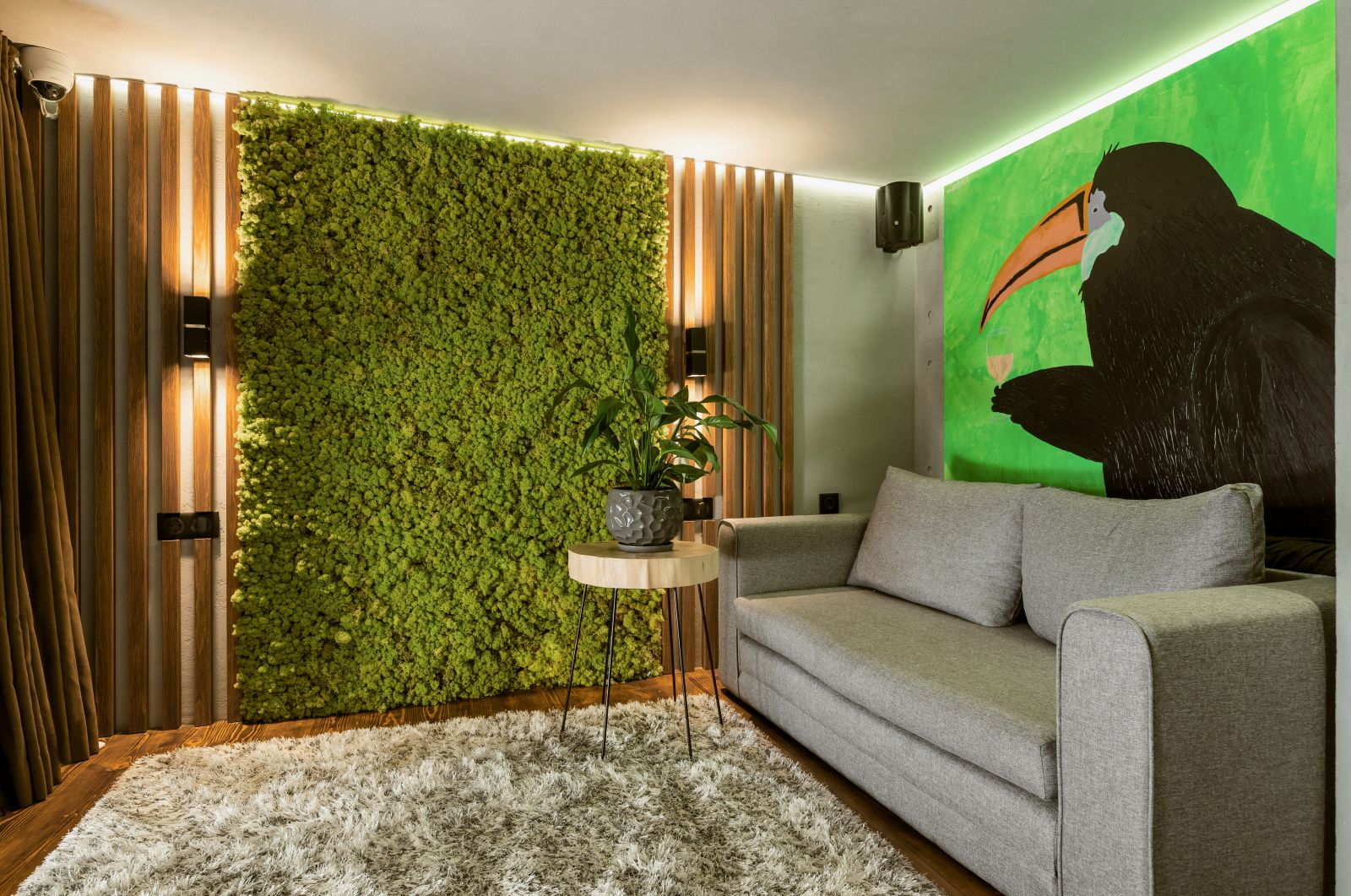 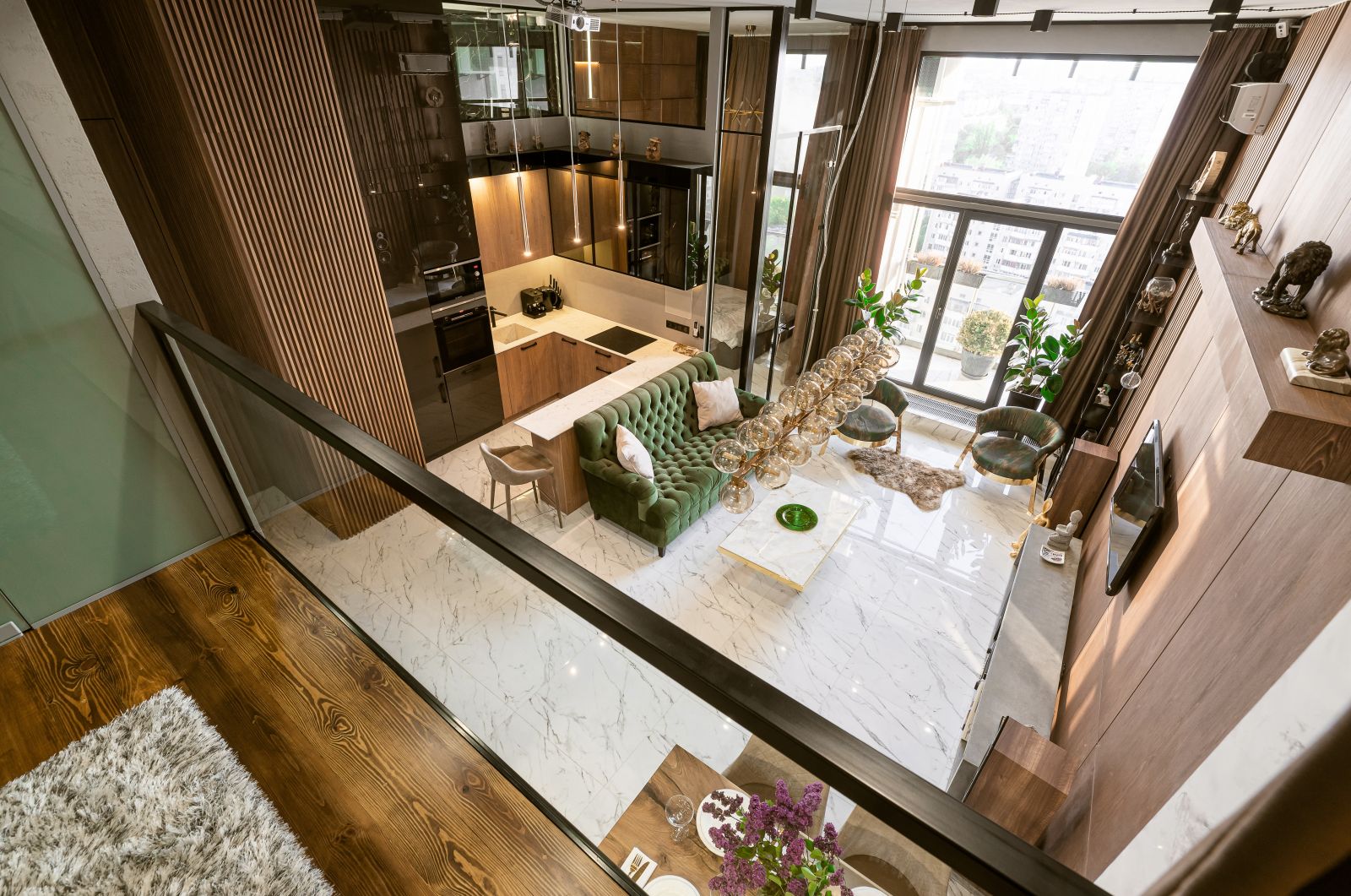 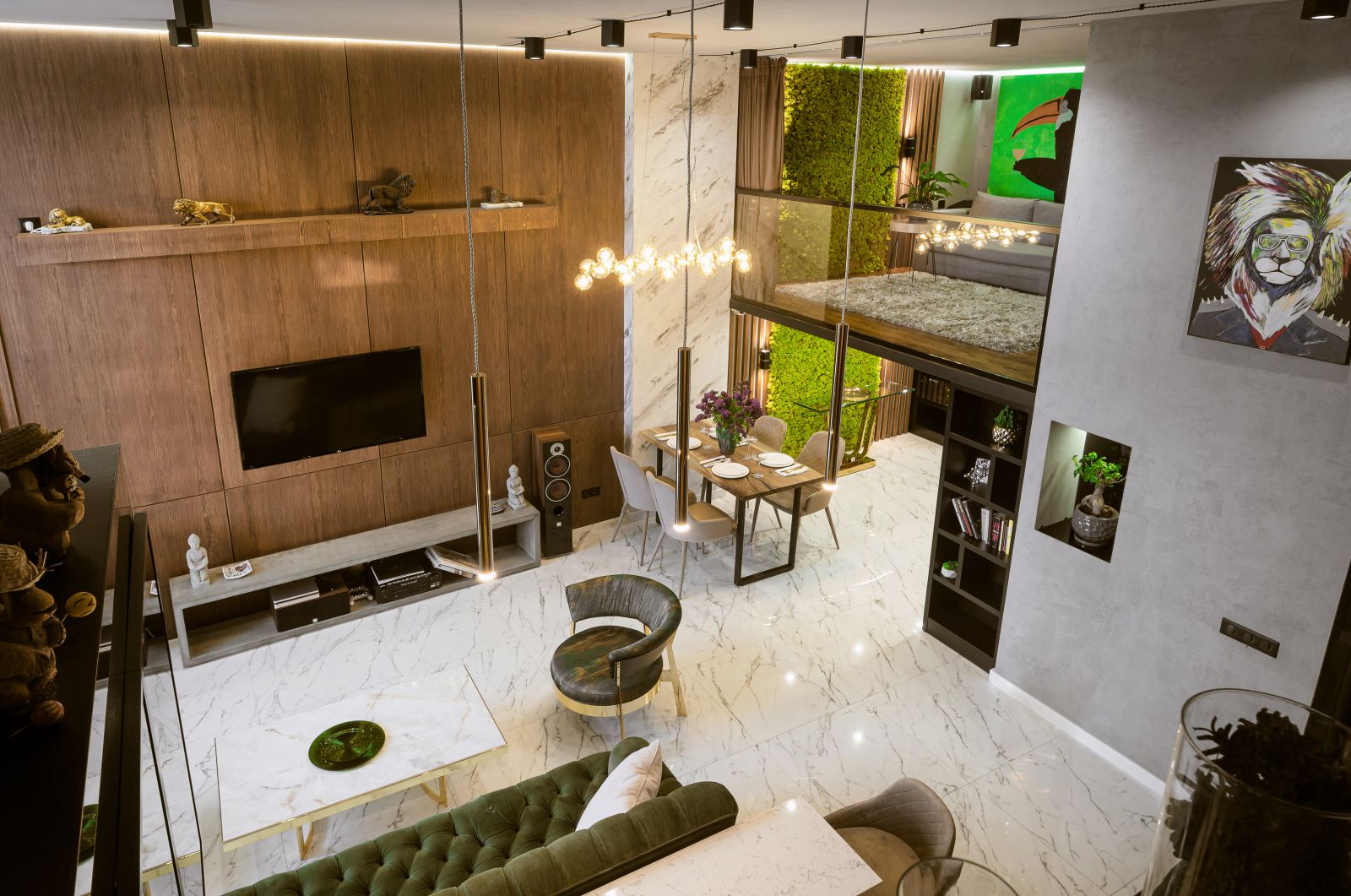 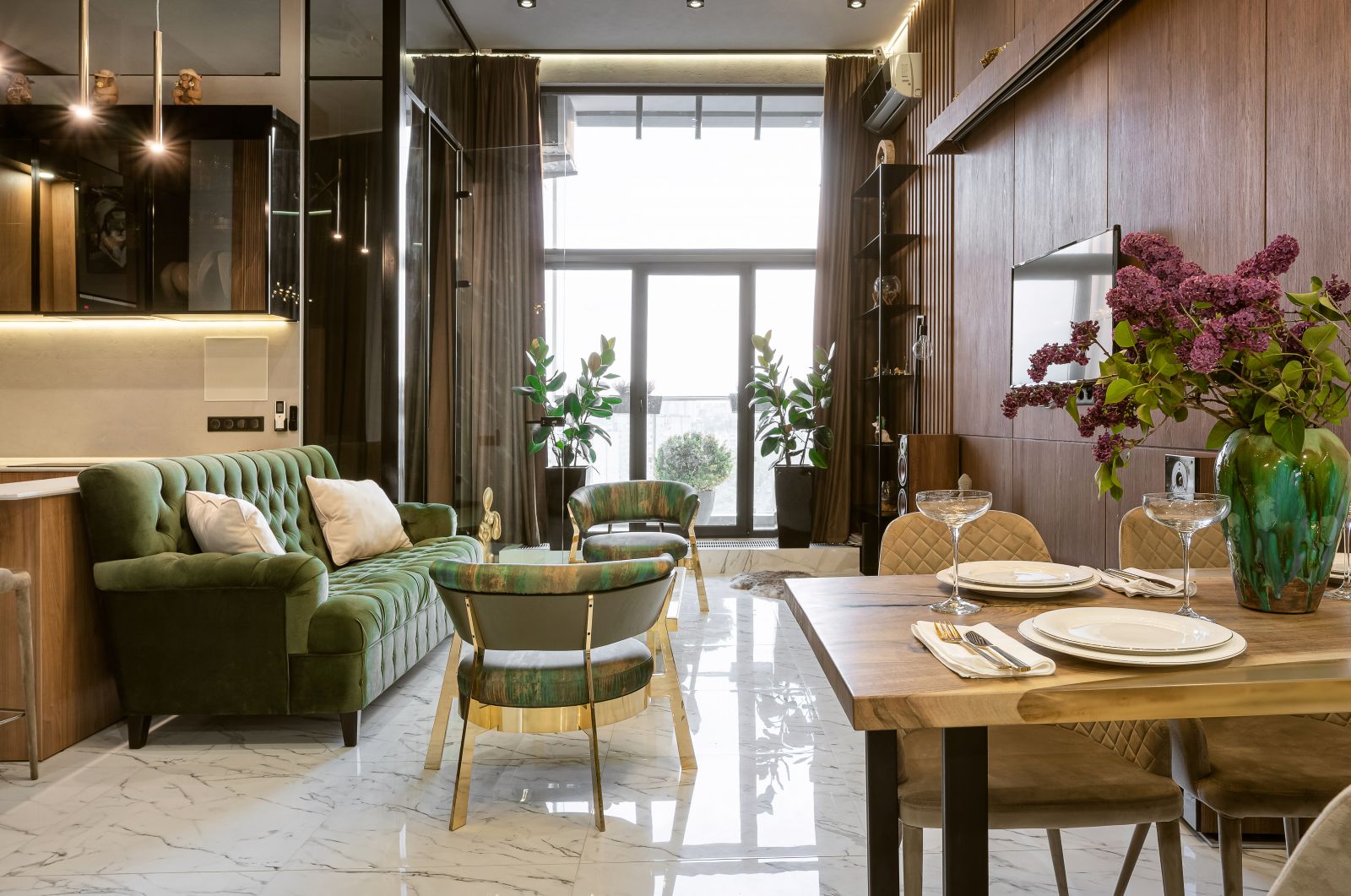 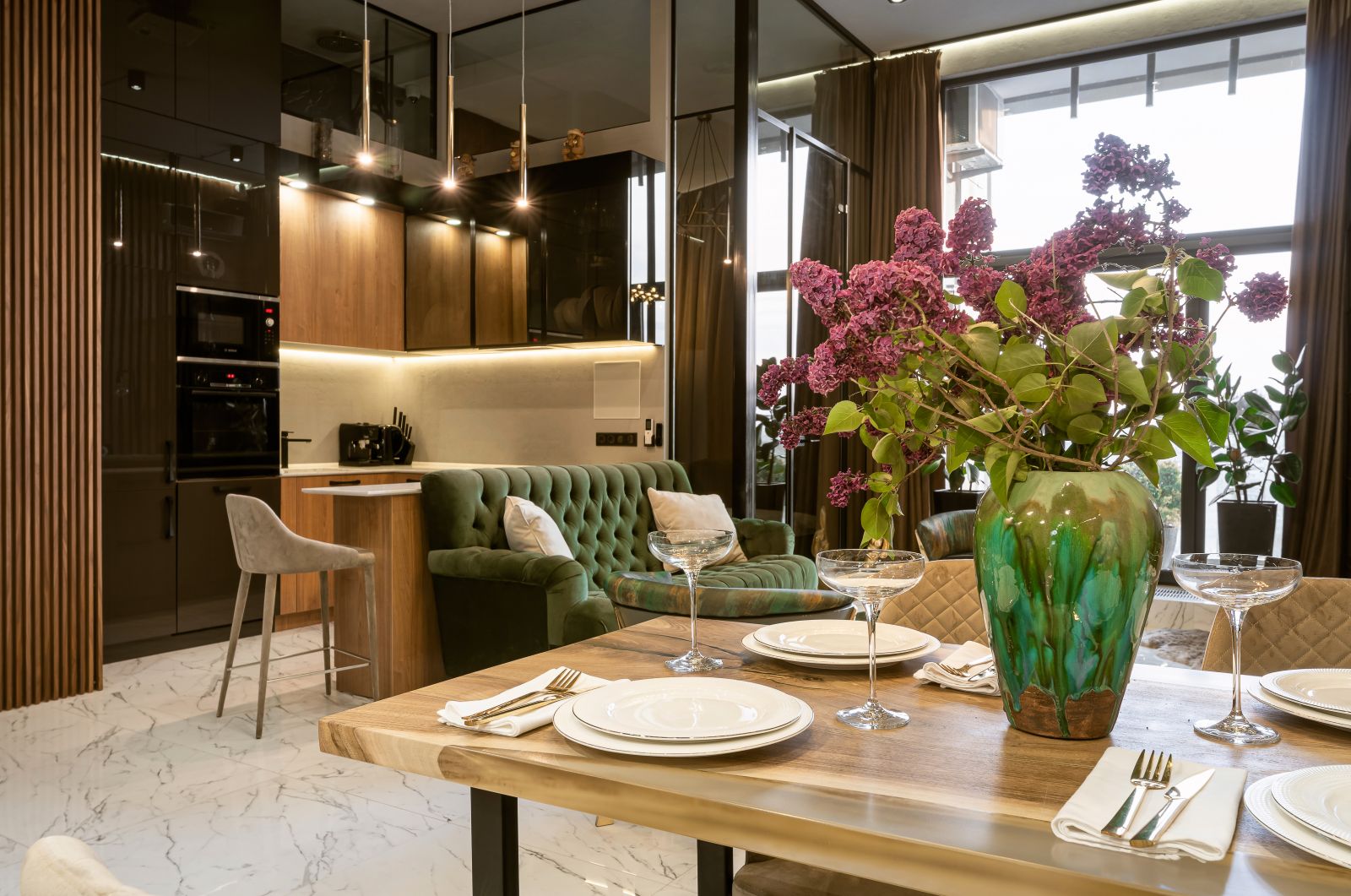 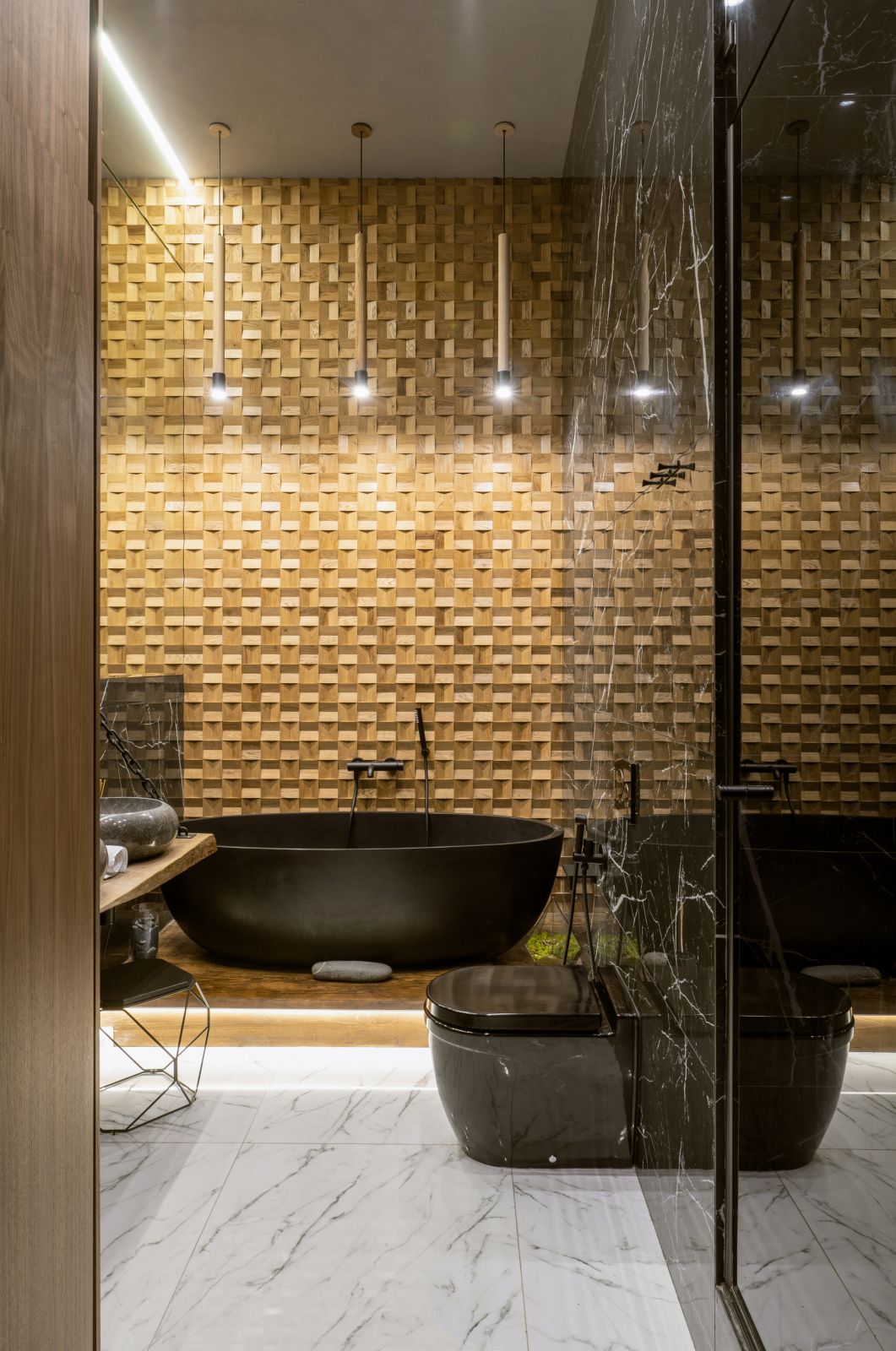 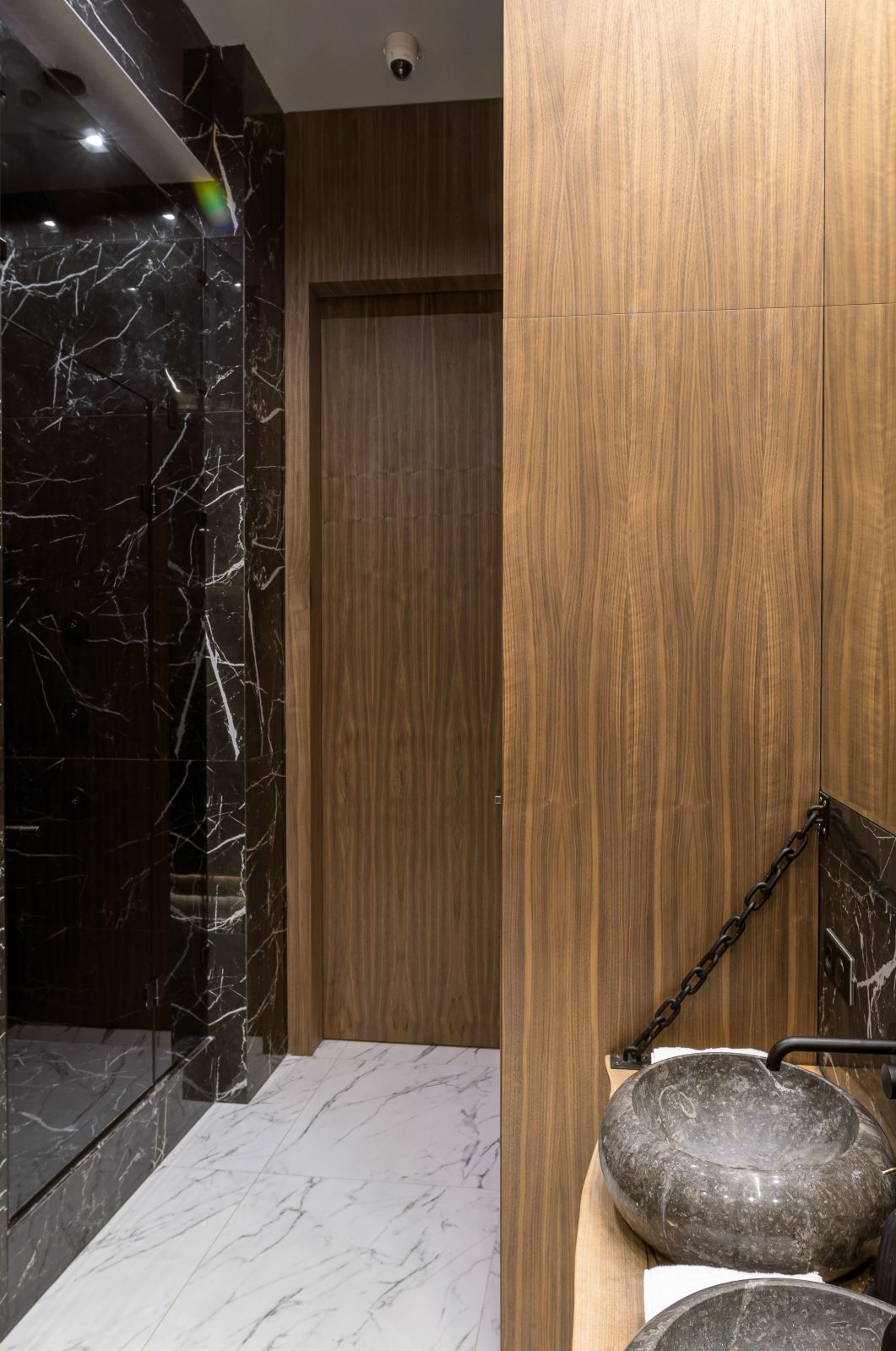 Want to know more about this project?